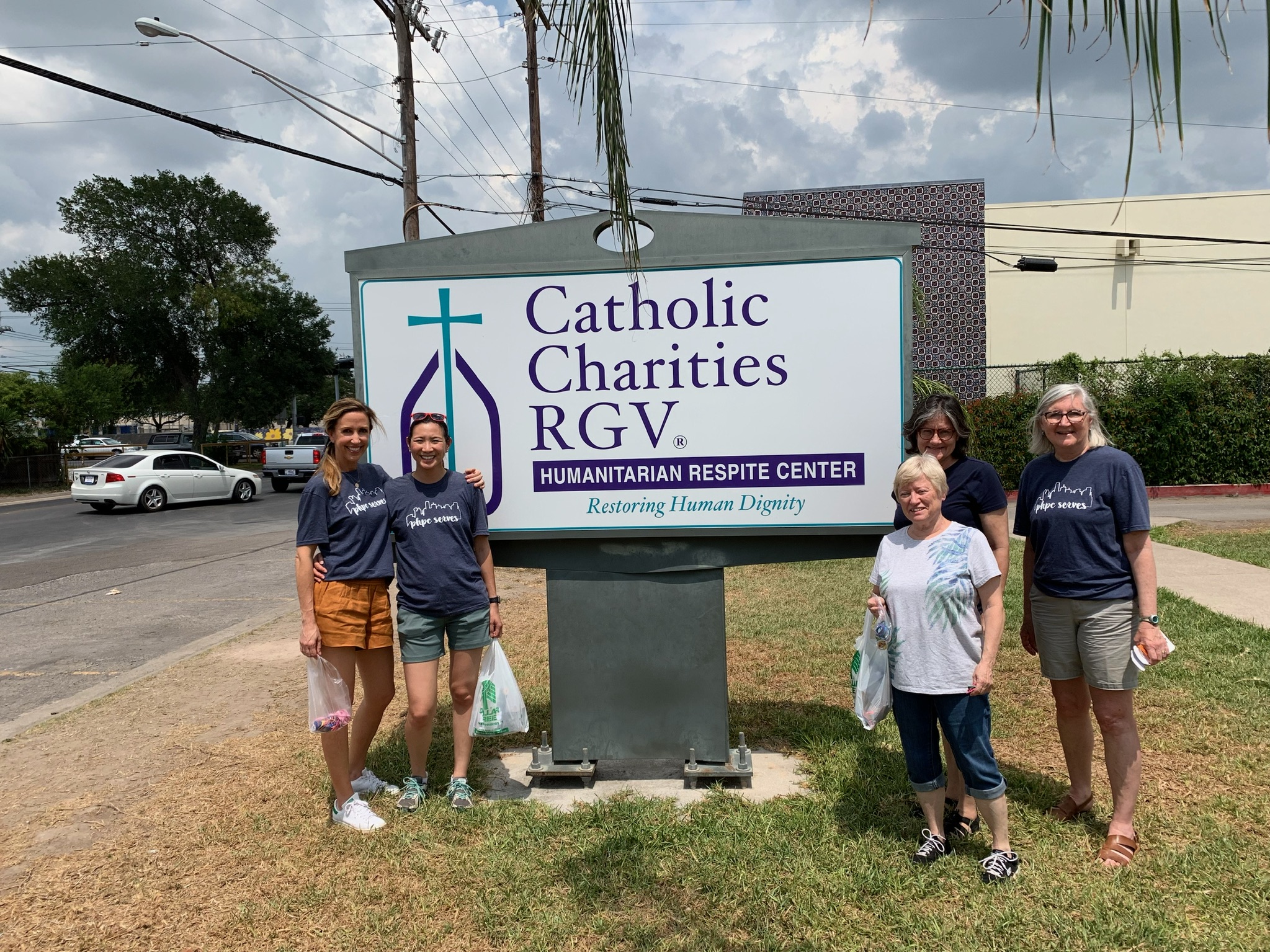 Our team sure picked an interesting time to get out of Dallas! Although we arrived in Brownsville three hours later than we anticipated, I was extra grateful that night to check into our hotel and have electricity, a hot shower, and a comfortable bed.

After our first full day in Brownsville, I continue to be grateful for our electricity (A/C!), hot shower, and a comfortable bed. We began the morning with dipping our toe into the Brownsville Federal Court House. This visit was give us a small glimpse into the legal process detained migrants and asylum seekers experience in the U.S. 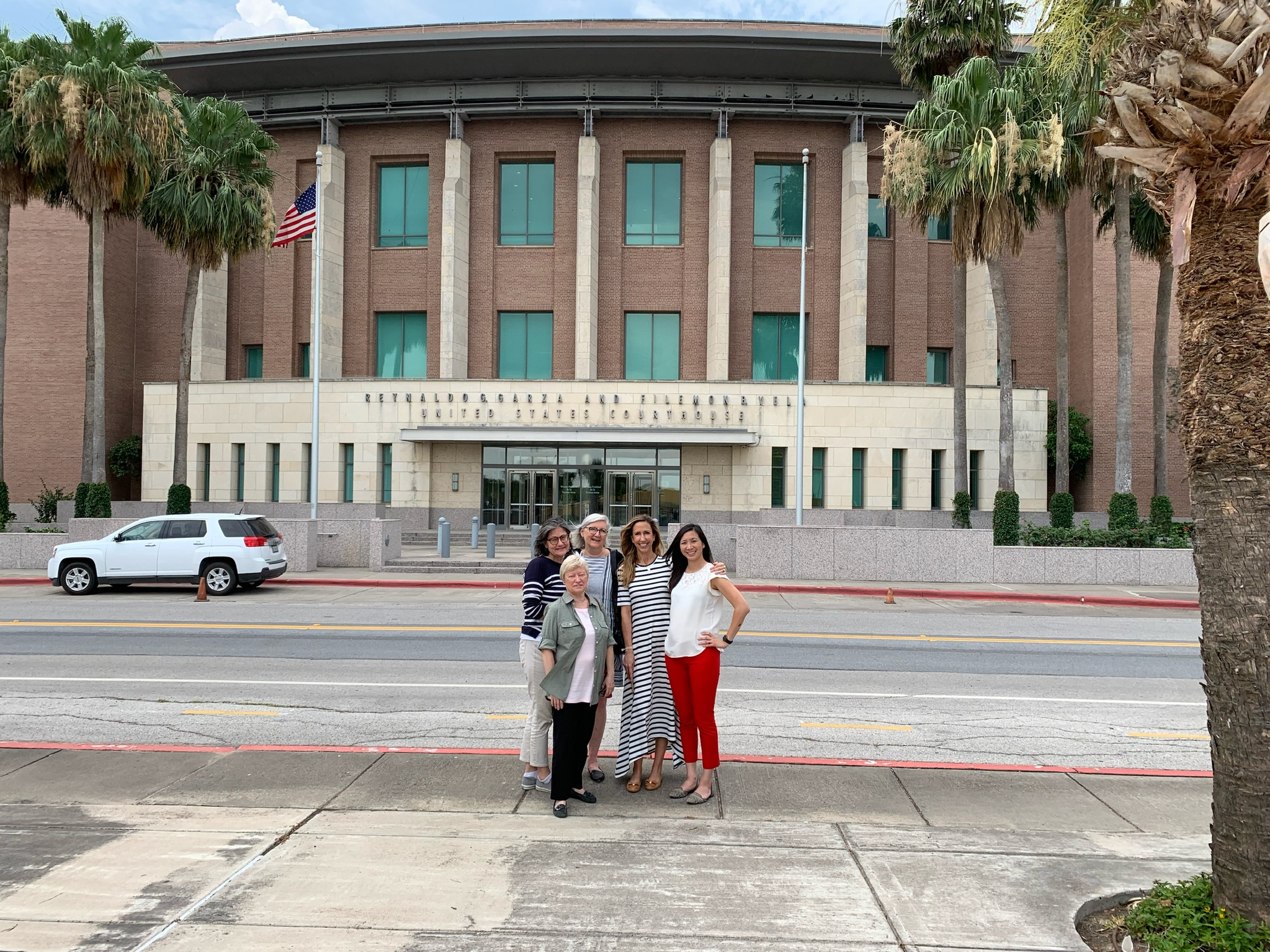 First, it was important for us to recognize that we were not at Immigration Court, but rather, at a Federal Court. Historically, the federal prosecution of “unlawful entry” or “illegal entry” — which means entering into the U.S. between ports of entry — remained relatively low until 2005. It was in response to the attacks of 9/11 that re-introduced the enforcement of a law that was originally designed to criminalize Mexican migration in the 1920s.

Last year, the then-U.S. Attorney General Jeff Session announced a new “zero-tolerance” policy, which meant the federal prosecution of anyone who crossed into the U.S. between ports of entry, including people who crossed to seek asylum in the U.S. This resulted in making these types of criminal prosecutions more than half the national caseload for federal judges.

Unfortunately, when we arrived to the courtroom, we were told we could not enter because all the available seats were being used by the defendants that morning. The security officer told us he did not want us seated next to felons.

We were eventually allowed to enter the courtroom, but by that time, all of the cases involving “illegal entry” (known as 1325s) had already been heard.

Later in the afternoon, we journeyed to McAllen to visit one of the respite centers serving migrants and asylum seekers who have been detained and released by the government. Championed by Sister Norma Pimental and countless volunteers, the Catholic Charities Humanitarian Respite Center provides basic amenities and services to anyone who walks through their open doors. The tagline on the bottom of the sign on the lawn reads: Restoring Human Dignity.

What does it take to restore human dignity? A simple gesture like providing shoelaces and hair ties, two of the items confiscated once migrants are detained. Having a fresh t-shirt, clean diaper, and a simple warm meal. Assisting with phone calls to connect individuals with their U.S. ties.

To be honest, the respite center is… rustic. The floors are dirty from the constant flow of foot traffic through its buildings. The sleeping area consists of plain blue vinyl mats placed on hard floors, with no sheets or pillows. I did not even venture to inspect the restroom situation. Even so, the respite center represented hope to many. The beginning to the end of a very long and arduous journey — physically and emotionally.

Our team was working hard to contribute to the work of the center that we didn’t get much opportunity to meet the other volunteers. We didn’t receive any official tour or explanation as to what was going on and why. My lack of Spanish certainly limited some of my interaction with guests. And still, there was an unspoken understanding between everyone there. We are here to care for one another and ensure people’s most basic needs are met. It reminded me of the nearly 40 verses in the Torah where the Israelites are commanded by God to “love the immigrant as yourself.”

"When immigrants live in your land with you, you must not cheat them. Any immigrant who lives with you must be treated as if they were one of your citizens. You must love them as yourself, because you were immigrants in the land of Egypt; I am the Lord your God.” - Leviticus 19:33-34

There is still much to process and more to see tomorrow as we journey to cross the border ourselves into Mexico.

Prior to entering seminary, Kathy served the denomination as the Site Coordinator for the Young Adult Volunteer Program of the Presbytery of South Louisiana (2008-2012), facilitating the mission service experience of yearlong volunteers in post-Katrina recovery areas. Kathy has served on the Advisory Committee for Presbyterian Disaster Assistance since 2008. Upon graduation, Kathy worked as the Interim Resettlement Program Supervisor for Refugee Services of Texas in Houston, serving refugees, unaccompanied minors, and their families.

Kathy’s husband, Alex, is also a Presbyterian pastor and is currently serving as the Interim Pastor for Westminster Presbyterian Church (Dallas, TX). Kathy and Alex are the parents to two adorable boys and a dog named Thomas. Kathy is a first generation Chinese-American, born and raised in New Orleans, Louisiana. Even after living in Texas for almost a decade, Kathy’s ideal day includes a strong cup of coffee, a crawfish boil with friends, and WWOZ on the radio.