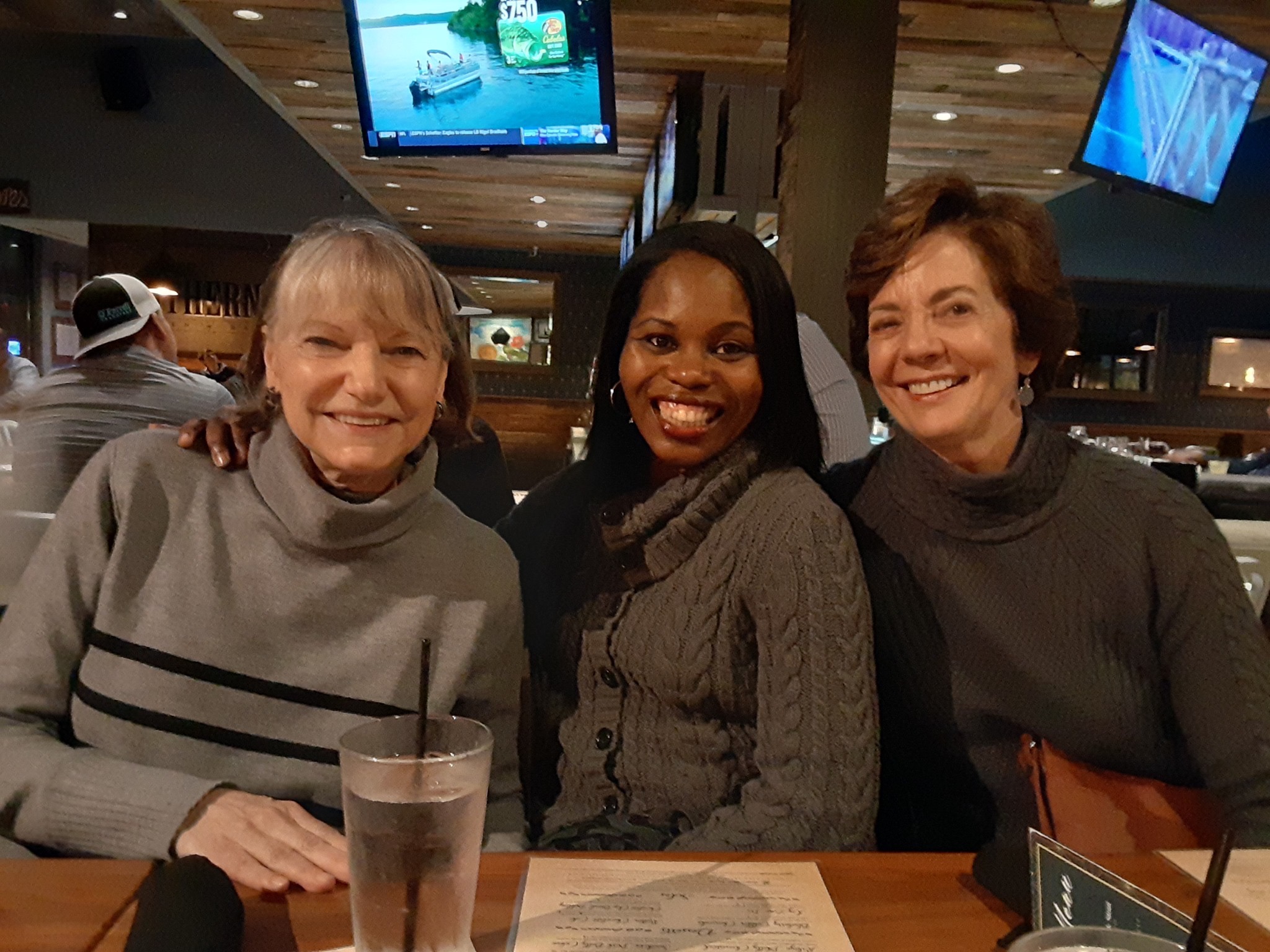 Racial Justice Pilgrimage - What Will You Carry With You?

As we head into our final days, traveling through Montgomery, Selma, and Jackson, Mississippi, we are beginning to think about all that we have learned on the Pilgrimage and what we will carry forward  into our lives and communities in Dallas. Each of us brings a home a unique perspective and we look forward to sharing with you in the days and weeks ahead. I also encourage you to seek out those who traveled on our trip in order to learn from their experiences and the wisdom they are carrying home. As we travel home to Dallas, here are a few things that I am carrying home:

Several months ago, I asked community leader and CEO of Dallas based non-profit City Square, what he thought were the greatest challenges facing the city of Dallas. As is often the case with Larry, he did not say exactly what I thought he would say. I expected that Larry would mention our city’s challenges with hunger or homelessness, or childhood poverty. Challenges that keep our city at the top of some of the worst polls in the country. But Larry didn’t mention any of these things directly. Instead, Larry said, “I believe the greatest challenge facing Dallas is that we simply do not know each other.” It was a profound observation. He went on to add, “We are reaping the harvest of generations of systemic racism, personal hatred, forces that red-lined our community literally in terms of residential areas, commercial areas, as well as parks and recreation areas. And so, we have a divided city and the result of that is that we simply do not know each other.” 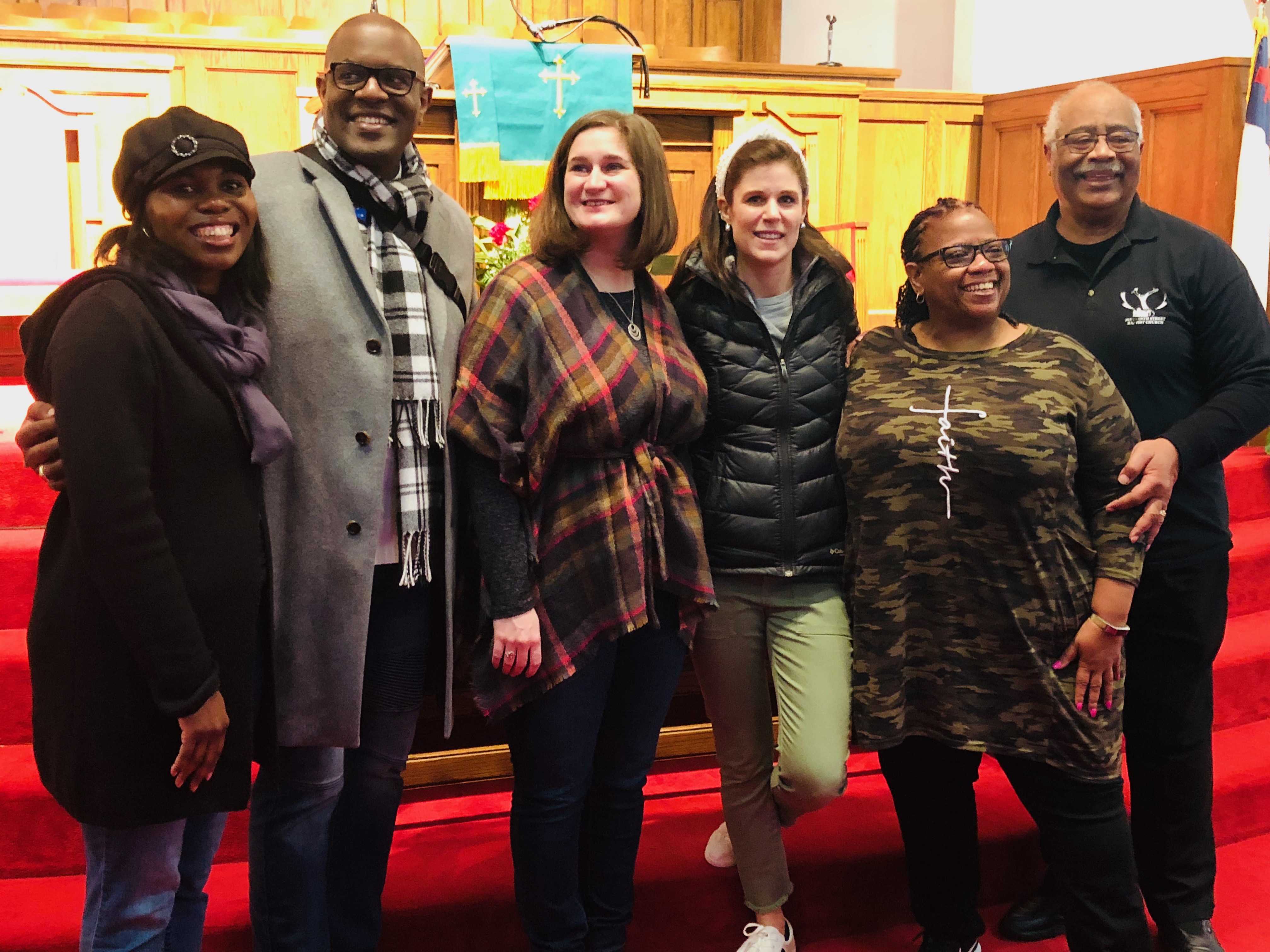 Traveling on PHPC’s Racial Justice and Equity Pilgrimage reminds me how very true that is in a variety of ways. On the one hand, a trip like this is a wonderful opportunity to “get to know one another.” If you have had the chance to travel on a pilgrimage or a mission trip, you know there is a magic that can happen on these journeys. We let ourselves detach from the schedules of our daily lives. We find a new rhythm with a group of people we may not have known before we boarded the bus. And if we are intentional, the Spirit of God feels a little bit closer. We form a new sense of community from sharing the journey—learning together, eating together, laughing together.

In particular, this trip also provides the opportunity to engage in community, friendship and conversation with persons of a different race. In so many instances from work to home, to church, our lives remain largely homogeneous. I know that unless I make a concerted effort, I remain largely in relationship with people who look and experience the world as I do. I imagine that this is true for most of us. This fact is a challenge we must work to overcome.

Therefore, I conclude our pilgrimage travels with a sense of profound gratitude for the opportunity to strengthen relationships with friends from the PHPC community, as well as the chance to form new friendships with those from Abundant Life A.M.E. As a group, we have also made new connections with guides, local leaders, and history makers who participated in the Movement. Their lives and stories interacting with ours and providing us with a fuller, more authentic experience of the history.

It is also the case that traveling together on a racial justice pilgrimage provides the opportunity to come to a deeper awareness about the things that keep us apart—past and present. One if those things is indeed the practice of red-lining that Larry spoke about in his assessment of the challenges facing Dallas.

Red-lining emerged in Dallas (and around the country) in the 1930’s during the period of the Great Depression when red lines were drawn around certain neighborhoods designating them as “high risk.” The redlining maps were a part of President Roosevelt’s New Deal and published by the Home Owner’s Loan Association as a way to pull the country out of the Depression. The maps were intended to provide banks with a metric to avoid bad mortgages and loans in economically disadvantaged neighborhoods. But the line distinctions the maps made were overtly racist. High-risk neighborhoods were defined by the number of foreign-born and “Negro” persons residing there. This meant persons in these communities were denied mortgages, home loans, and other services that form the foundation of thriving communities and contribute to the build-up of generational wealth. At the same time, other communities were designated as “desirable.” If you were white, Anglo-Saxon and Protestant, you were afforded significant advantages with regards to these same services in the “desirable” neighborhoods.

Redlining was deemed illegal by the Fair Housing Act of 1964 but its effects linger today. There is a reason that our communities feel divided. Racial hierarchy is built into the very geography of our city, defining economic opportunity and allowing for structural racism to seep into our education, health, and policy structures. If you place a redlining map over those neighborhoods in our city who still struggle for equitable opportunity today, you will find that they correspond. This is to say nothing of other opportunities like the GI Bill from which African Americans were excluded, and the generations of slavery and segregation that kept communities of color from participating fully in the US economy. Redlining and the lingering effects are a difficult truth to come to terms with, but one we must be honest about if we are going to move toward a more unified equitable community for all. If you are interested in learning more about redlining and its impact on our communities, The Color of Law by Richard Rothstein is a wonderful resource. 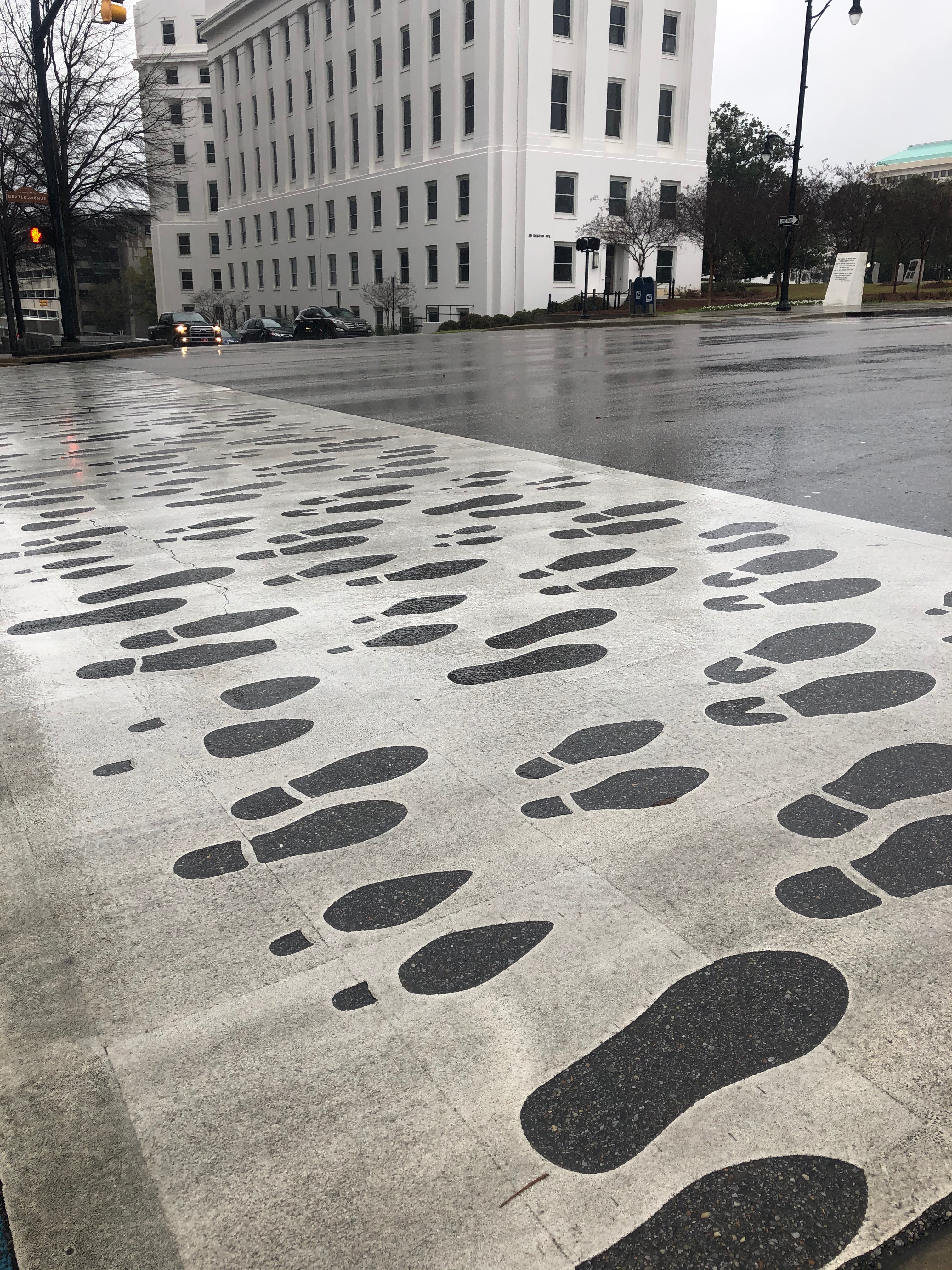 Well-known wisdom reminds us, “Those who do not learn from history, are destined to repeat it.”

Throughout our travels, all of those persons who shared their stories of the Movement, lamented the fact that most people do not know the history. It is true that I studied the Civil Rights Movement in school. It is also true that by traveling on the Pilgrimage, I have learned a tremendous amount of new history and first-hand details I had never heard. As trip participant Kathy Liebendorfer noted, “I am astounded at how much I did not know what I did not know.”

Many of us know of John Lewis, or Rosa Parks, or Martin Luther King Jr. but fewer know of Medgar Evers, Richard and Vera Harris, Fred Shuttlesworth, Fannie Lou Hamer, Jim Bevel, Amelia Boynton Robinson, Ella Baker, and so many more. These were everyday men and women who gave their lives to the cause of racial equity in our country and whose stories must not be forgotten, erased, or sanitized. 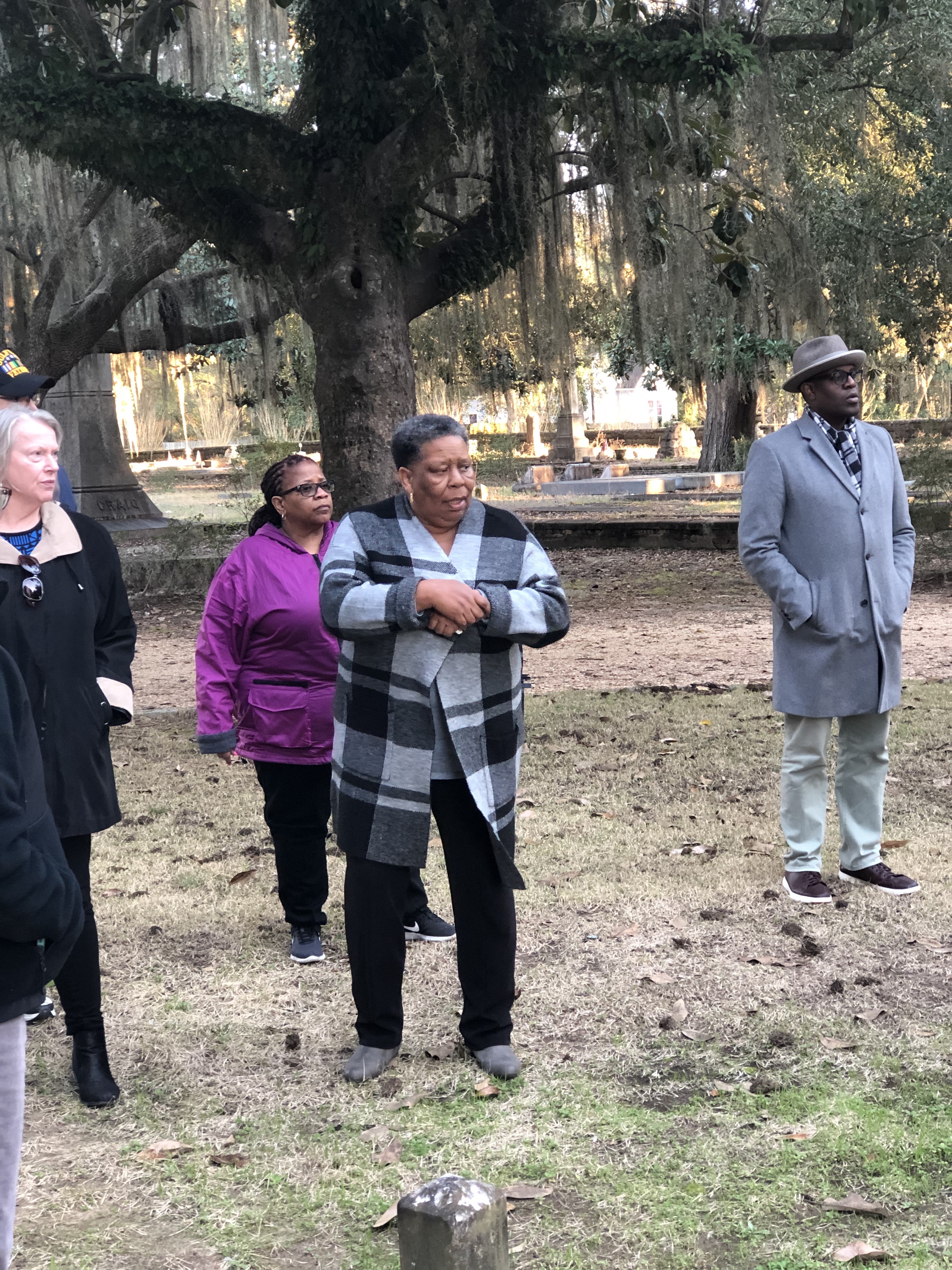 On one of our last days, we spent time in Selma, Alabama with Joanne Bland. Born and raised in Selma, Joanne is the co-founder and former director of the National Voting Rights Museum in Selma. As a young person, she was a highly active participant in the Civil Rights Movement, and was the youngest person to have been jailed during any civil rights demonstration during that period. By the time she was 11 years old Joanne had been arrested 13 times. She and her sisters were also present on the bridge on March 7, 1965, known as Bloody Sunday, as well as the two marches that followed on Turn Around Tuesday and the first leg of the successful March from Selma to Montgomery, experiencing the brutal beatings of marchers by police. Joanne recalls waking up in the back of a pick-up truck, having been beaten, her sisters blood dripping down onto her clothes.

Despite limited opportunity, Joanne has remained in Selma, a protector of this sacred history and investing in the community, especially the young people in Selma. After a tour of the city, Joanne directs us to stand on a concrete slab just behind Brown Chapel A.M.E. She has us pick up a rock from the concrete slab, reminding us that this broken concrete was the place where John Lewis had gathered the marchers before walking across the Edmond Pettus Bridge on Bloody Sunday. She invited us to raise our hands with our rocks clutched in our palms, and remind ourselves that we too have a responsibility to be history makers. 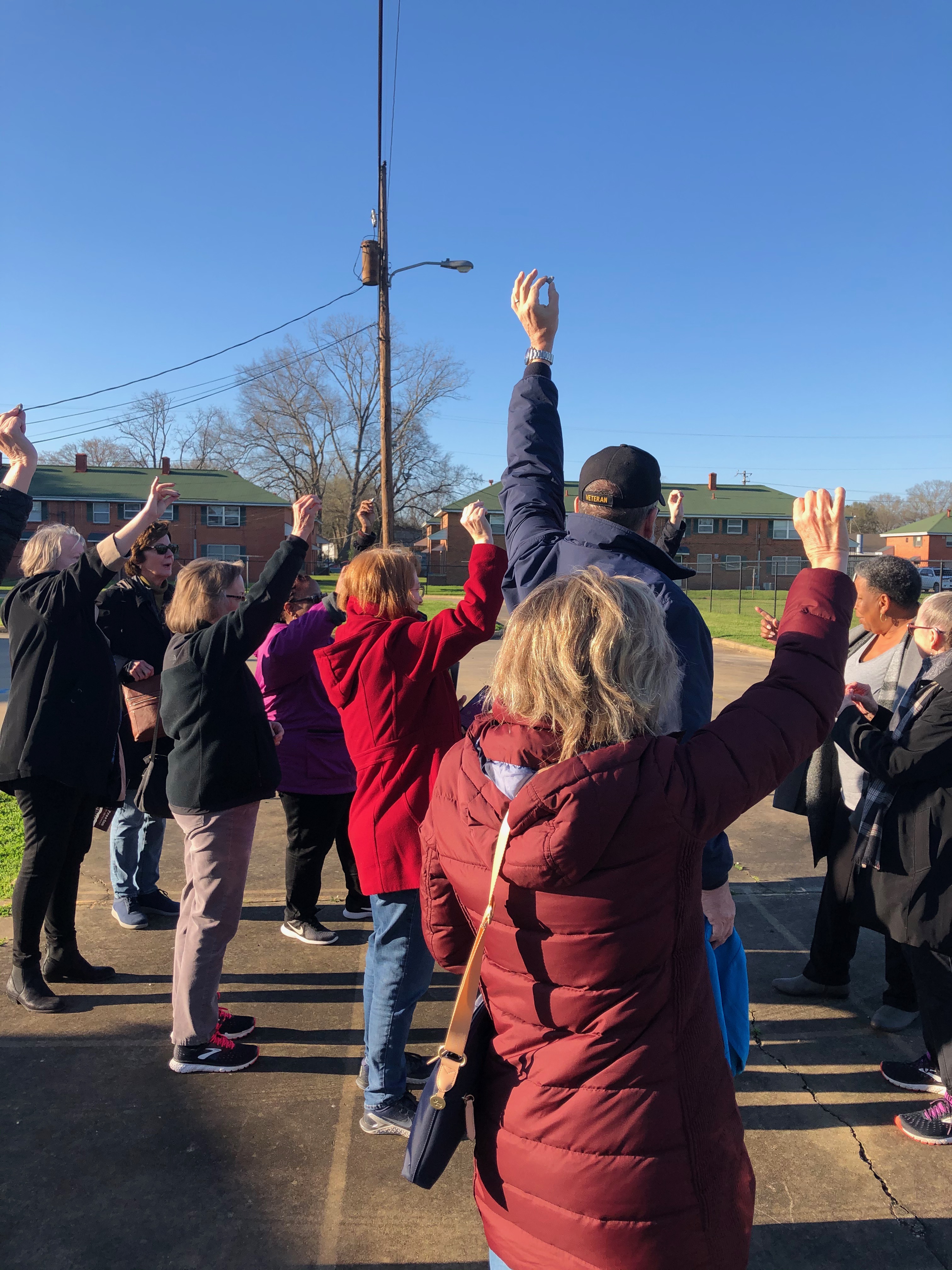 And then she added, “You take this rock home and you put it somewhere you can see it. And any time you see injustice against any human being, remember that rock and the people who stood in this place, and then get up and do something. Do not tell me you cannot make a difference. Sometimes life is a matter of just saying something. Do not be a silent witness.”

This is my second rock from Selma. The first sits in the windowsill in my kitchen and I will place this year’s rock beside it. Both continue to serve as a powerful reminder that we cannot wait for someone else to change things. We are the change the world is waiting for.

As our final act in Selma, we walked in silence two-by-two, as those marchers had, across the Edmund Pettus Bridge. They walked to fight for their full place as fair and equal citizens of this country. We remembered their sacrifices, reenacted history and committed to walk the bridges of history that we still need to cross. 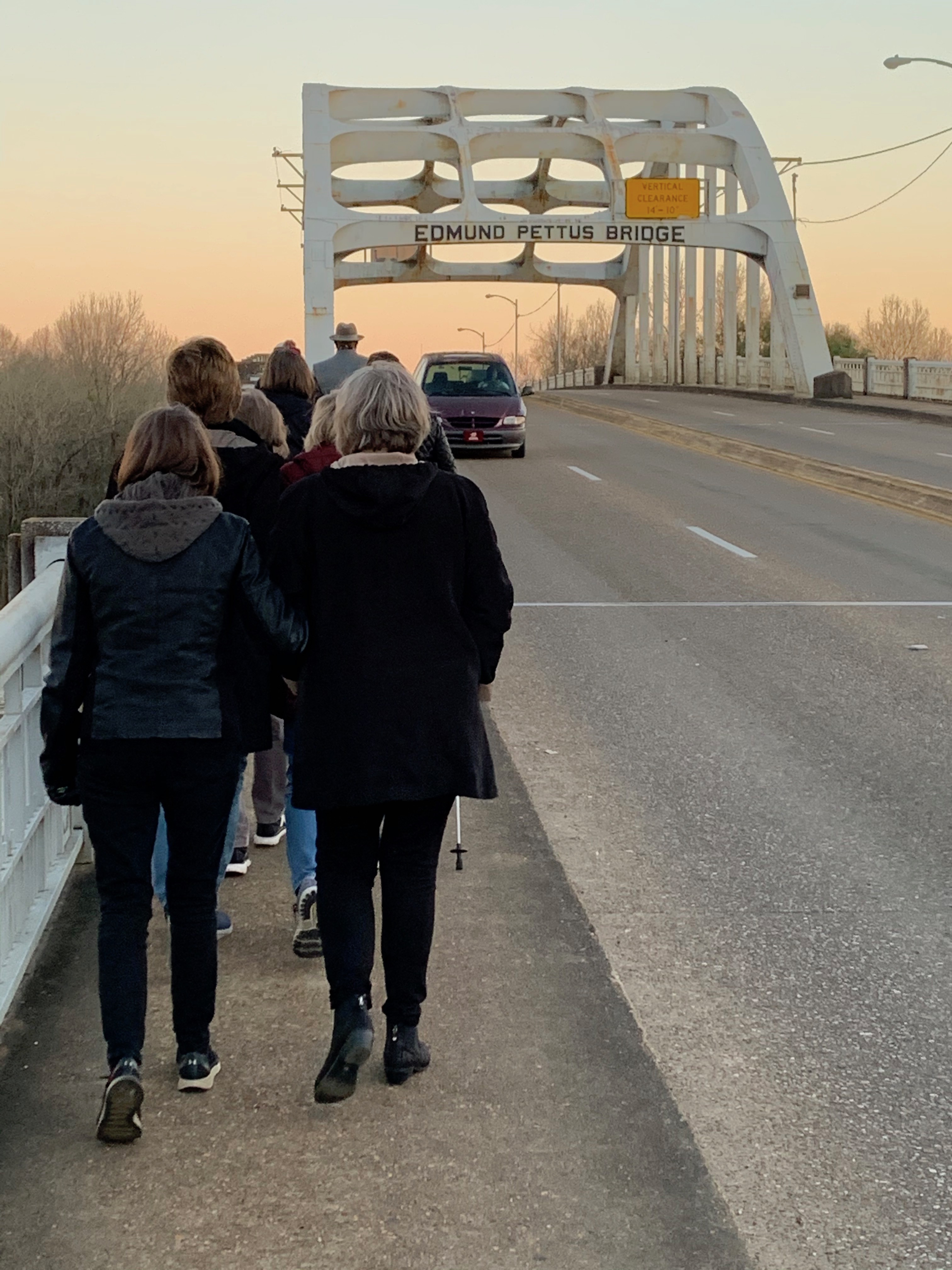