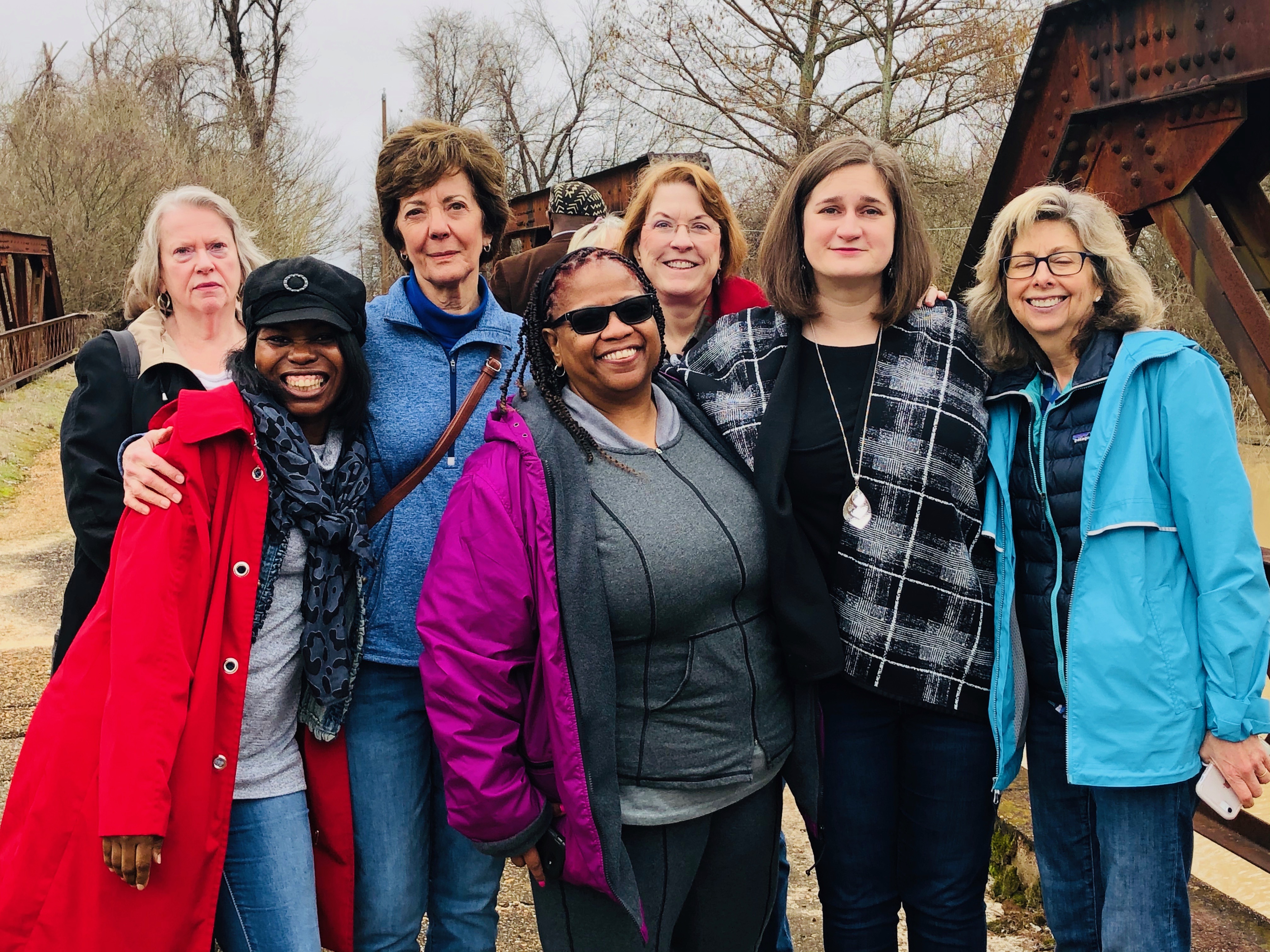 On the road again…

On Sunday afternoon, a group of members and friends of Preston Hollow Presbyterian Church and Abundant Life A.M.E boarded a charter bus to begin our travels on the church’s second racial justice and equity pilgrimage to Mississippi, Alabama, Arkansas, Tennessee and Georgia. Our journey will take us through historical locations and touchpoints of the civil rights movement, visiting with those closest to the movement and many who participated in it.

The first leg of our journey is the long drive from Dallas, Texas to Glendora, Mississippi where we officially began our touring Monday morning. At first glance, there isn’t much to the town of Glendora. The total population is around 150 persons and the dilapidated buildings look like relics of a place where time has stood still. In fact, Glendora mayor Johnny B. Thomas will tell you, “From slavery to Jim Crow until now there is not much difference. The community here is still poor and African American. It hasn’t seen much change and change is needed.” But despite its humble appearances, Glendora holds an important, if not infamous, place in the history of the American civil rights Movement. Many consider it the birthplace of the movement.

It was in Glendora that fourteen-year-old Emmett Till was lynched and murdered by two white men Ray Bryant and J.W. Milam for supposedly whistling or speaking to a white woman. On August 28, 1955, Emmett was dragged out of his bed in the middle of the night, tortured over a period of several hours, shot, and throw into the Black Bayou, his body affixed with barbed wire to the fan from a local cotton gin.

Bryant and Milan were arrested and charged with Emmet’s murder but quickly found not-guilty by an all-white jury. Several months later, the two men sold their story, in which they admitted to lynching Emmett, to Look Magazine for four-thousand dollars.

Emmett’s death is horrific tragedy. And while his story is no longer new to me this time around, it is no less horrific. For coupled with the story of Emmett Till is also the ongoing realization that his death was not unique. Black men and women were regularly murdered for “stepping out of line” or for no reason at all, their bodies dumped into the rivers and bayous of the Mississippi Delta. Mississippi was the deadliest state in the union for killings and lynching of black Americans (Texas is not far behind at number three).

What made Emmett’s death different was the courageous decision of his mother Mamie Till to insist that after her son’s body was dragged from the river that he not be buried immediately (an attempt by authorities to cover up what happened) and that his body be shipped back to Chicago and the casket left open for his funeral service. While an open casket was a common practice at funerals in the African American tradition, Mamie insisted that her son’s casket be left open so that the world could see what they did to him.

Emmett’s service was broadcast on national television and pictures of his brutally mutilated face sent shock waves through the nation. When Rosa Parks was arrested during the Montgomery Bus Boycott, she is reported to have said that while she thought about going to the back of the bus, she saw Emmett Till’s face and she couldn’t do it. Emmett’s death ignited the momentum in Movement.

As a group, we spent the morning visiting the Emmett Till Museum and Historic Intrepid Center, proudly curated and maintained by Mayor Johnny B. and the locals of Glendora, as well as the bridge where his body was dumped and the bayou where it was discovered.

It is February and so the sky is gray and the landscape is barren. But despite the season, the earth feels haunted and unsettled, as if it too cries out of the horrors that it was forced to participate in, and the wounds that remain unhealed. Cotton fields linger as reminders of the legacy of king cotton, slavery, and sharecropping.

As we walk toward the Black Bayou where Emmett’s body was discovered, our group leader Rev. Dr. Michael Waters points out that in many ways you can tell the entire story of race in America in the spaces along this road: On one side of the path, remnants of cotton plantations that formed the foundation of our country’s strong economy, built on the backs of human slave labor and the resulting violence instilled in systems policies and institutions. And on the other side, the literal physical violence represented by Emmett’s body floating in the bayou. It is a legacy of the past that haunts us in the present. It always proves to be a somber morning.

Strangely, as I re-enter the story of Emmett Till, I cannot help but think of Pope Francis. On the occasion of his first mass, the Pope chose to celebrate the Eucharist on the small Italian island of Lampedusa. Like Glendora, Lampedusa is a place that knows unspeakable suffering. On its shores, the bodies of thousands of poor desperate migrants had washed ashore, practically unnoticed by the rest of the world. As Pope Francis lifted the bread, the broken body of Christ, he asked God for forgiveness for his complicity in the suffering of others in the past, and prayed for the grace to see it clearly in the present and not to cross to the other side. In a world of globalized indifference, Pope Francis was inviting us to feel again. A reminder that we belong not only to God, but also to one another.

I wonder if the story of Emmett Till doesn’t beckon us to do something of the same: To clearly see and feel the suffering of our brothers and sisters in the past that we would take collective responsibility for its impact on the present. As Mayor Thomas is fond of saying, “Healing must start in Glendora. We must ensure that yesterday is not forgotten so that tomorrow might be better.”

The rest of the day’s journey will take us from the Mississippi Delta into Little Rock, Arkansas to Central High School and the story of the Little Rock nine. We will stop briefly to visit the high school, reflecting on their experience of integrating the school in 1957. From there, we will drive on to Memphis where we will begin on Tuesday. There is much to take in and the days ahead promise to be challenging and full.

We hope you will continue to travel with us!