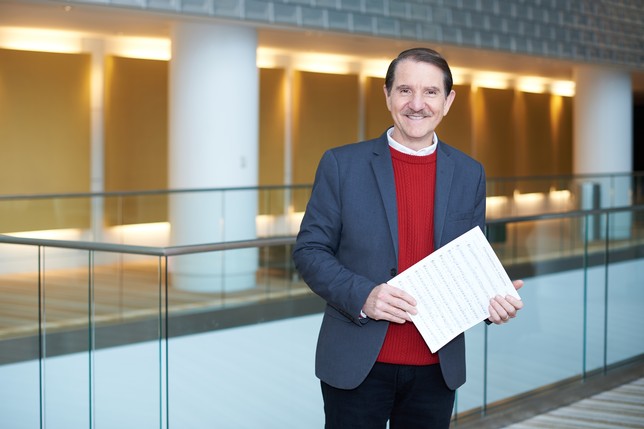 An Interview With Gary Fry - Masterworks 2020

Gary Fry is an Emmy-winning Chicago-based composer, arranger, producer, and music educator. He has crafted music for recordings, films, commercials, publication, and live performance. Significant credits include his position as arranger/composer for the Chicago Symphony Orchestra’s Welcome, Yule! holiday concerts since 1996, artistic consultant to the Dallas Symphony Orchestra for their annual Christmas Celebration concerts, and over 100 commissions for Christmas and holiday music from those orchestras and others from around the nation.

Gary will be in Dallas on March 8 to conduct his original work "Canticles: How Can I Keep From Singing?" at Preston Hollow Presbyterian Church. The concert is at 7 pm and is free and open to the public!

When did you start composing - and what or who were your early passions and influences?

I started with writing songs, for a pop band I formed with classmates from seventh grade…the somewhat predictable early-teen-angst expressions of unrequited love and the like! I did some arranging for my high school jazz band and chorus. But I never really considered composition (or even music) as a viable career; there were no musicians on either side of my family of Iowa farmers. Not until I was a sophomore at college did I shift my path to music and composition. I loved the composers of the time who were combining pop and serious music genres: Leonard Bernstein and John Williams were a couple of my favorite composers, and to this day their music inspires and motivates me. Film music in general became a big influence (composers such as Jerry Goldsmith, Alan Silvestri, and Bruce Broughton), and of course the years I spent honing my craft in writing commercial music resulted in my desire to be able to communicate musical ideas quickly and clearly. I hope I’m still learning and soaking in influences— I certainly retain my passion for writing, especially now sacred and Christmas works.

What do you usually start with when composing?

Broadway lyricist Sammy Kahn was once asked, “What comes first, the lyrics or the music?” His famous reply: “The phone call.” I can relate to that! I call myself a music craftsman, and with very few exceptions over the course of my career, I write music to fit a particular event, occasion, or circumstance when asked to do it! Once asked, I need to know the parameters: what are the performing forces? How long should the piece be? What is its intended impression? What is its context? All of those things play into my thinking before I ever write a note or word. Then I usually try to find a title for the concept, and everything flows from that: the lyrics, the structure, and the dramatic arc. I’m not the type of composer— though I respect and sometimes envy them very much!— who sits down and ‘summons the muse’ to create an expression of what I’m feeling at the moment.

What’s your relationship to Preston Hollow? What has contributed to this special collaboration?

I met Terry Price (former Preston Hollow Director of Music) when he was interim director of the Dallas Symphony Chorus, for whom I was writing Christmas music, over 10 years ago. He sent several commissions my way from members of the PHPC congregation, for Christmas works and things for the wonderful Americana concert. When Steve Jobman took over the reins from Terry, I had already written music for Steve in his previous position, so it was easy to continue the relationship. I’ve had many wonderful experiences at Preston Hollow over the years, and count members of the choir and congregation among my friends, so I’m very much looking forward to be there once again!

Where did the idea for Canticles come from? What story do you hope to tell with this work?

This year’s commission is especially meaningful because the above-mentioned metaphorical ‘phone call’ came by way of a conversation and request from PHPC member Pat Evans. Pat had previously commissioned a piece from me that was presented at the 2013 Americana concert there, called “Little Miracles,” and she asked if I’d be interested in collaborating with her on a work based on the writings in the Gospel of Luke. Pat is a wonderful doctor and had a special affinity for Luke, who is believed to have been a physician as well. Luke also presents in his Gospel several canticles, or songs, from the important characters the Virgin Mary, Zechariah the father of John the Baptist, and Simeon the aged devout Jew who meets the baby Jesus at the temple. These, plus the song of the angels at Jesus’ birth (the Gloria), show that Luke considered singing very important to include in his Gospel. Pat thought that it was a great opportunity to present Luke and those characters in a fresh musical light, and I agreed. Pat worked to structure the lyrics and dramatic interstitials for the piece, and I wrote the music. The text is a combination of Greek, Latin, and Pat’s English lyrics, and the music has a Celtic flair with nods to plainchant and folk music (including in the orchestra a trio of accordion, acoustic guitar, and the Irish percussion bodhrán). Also included within the original music are presentations of the Doxology and the hymn “How Can I Keep from Singing?,” which has already been performed as a little ‘preview’ of the work and so that it is familiar enough for the congregation to join in singing at the work’s conclusion.

Pat’s passion for Luke and the narrative he presents was tremendously inspiring, and I’m so pleased with the result and grateful to Pat for initiating this collaboration. I sincerely hope the congregation finds this new approach to the canticles in Luke to be meaningful and enjoyable. It is a work of theosony— responding to an encounter with God in a most natural and emotional way: to sing. As the final line of the hymn says, “For Christ is Lord of heaven and earth; how can I keep from singing?”