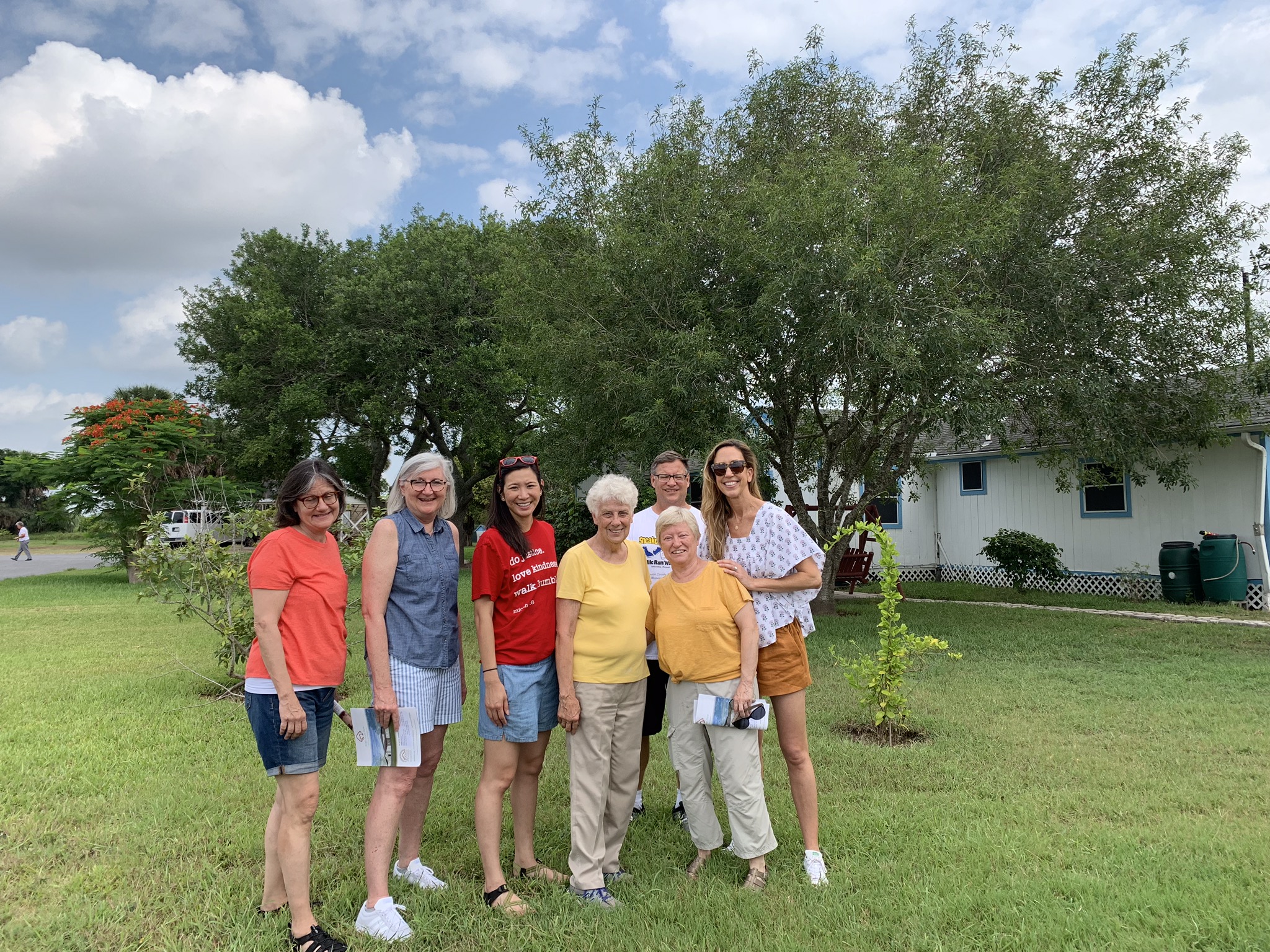 This evening, as we reflected on our experiences in Brownsville, our leader Mike asked each of us to select a Bible passage that resonated with us and what we’ve witnessed. I chose Matthew 5:1-11, known as the Beatitudes. I believe Jesus’ words are an apt reminder of God’s vision for us:

Blessed are the poor in spirit, for theirs is the kingdom of heaven.

Today, we crossed over the Matamoros Bridge and entered into Mexico. This is where asylum seekers can legally enter into the U.S. to request humanitarian protection. A newly built fence and posted federal agents have been put into placed in the middle of the bridge so individuals are unable to step across the border and request asylum.

The result of this practice, known as metering, is the creation of a makeshift community beneath the foot of the bridge. Here women, men, and children who have journeyed for miles spend their days and nights waiting for an opportunity for mercy from the U.S. As we found ourselves waiting out a rainstorm inside the shelter of the U.S. checkpoint, I couldn’t help but wonder how those out in the elements were fairing. And I couldn’t help but think of the Israelites wandering in the wilderness for 40 years for the Promised Land.

Blessed are those who mourn, for they will be comforted.

Throughout our time here, we have heard stories of hope and stories of great loss. During our conversation with Michael Seifert, a staff member of the ACLU, he asked us this challenging question: Is it ever right to tear apart a family?

We watched short clips of State Trooper dashboard cameras where families were literally torn apart. There is a scene where a teenage boy just learns his father is about to be detained, and will soon be deported, and he weeps. And I weep. Because so many people impacted by the enforcement of our broken immigration system are families. Mothers, fathers, sons, and daughters – torn apart from one another and from safekeeping.

Blessed are the meek, for they will inherit the earth.

In 2018, the number of immigrants who were detained and subsequently requested “voluntary departure” was more than double the numbers of the previous year. The conditions of the detention centers and the lengthy and costly legal processes are too much to bear. However, the only detainees who qualify for “voluntary departure” (and are sent back to the very communities they fled from out of fear) are those without any criminal background. Mike Siefert shared how he met a young man in a detention center who had been detained for three years. When Mike asked a federal agent why this man had been there for so long, the agent said, “Because he insists on fighting for his rights.”

What has given me hope are the residents in these border towns who tirelessly serve, work, and advocate because they believe a better world and system for immigration is possible. Even though it’s easy for people like me to be distracted by the constant news cycle and the overwhelming issues that cause so many people to suffer, there are people like Mike and Cindy Johnson who stay passionate and compassionate about the people who are most impacted by our immigration enforcement policies.

Mike and Cindy are retired elementary school teachers and faithful Methodists who cross the Matamoros Bridge once a week – even when they are not leading groups like ours – to bring food and supplies to those living in the encampment just below the bridge in Mexico. They are quiet saints who do not get any publicity, but are likely keeping children and strengthening the hope of people who live on the fragile edge of despair.

Sister Zita Telkamp is about to celebrate 70 years since being first called at the age of 15 to join the Sisters of Divine Providence. The last 30 of these years have been filled with serving a ministry known as La Posada Povidencia, a shelter and community in San Benito, Texas for immigrants and asylum seekers. Sister Zita tells us they accept anyone who shows up on their steps and the first thing anyone receives is a warm meal.

Hanging on the wall of their dining room, in poster board lettering, is the phrase: Many Cultures, One Family in God. Sister Zita says the emphasis on family is how Sister Zita sets the tone and rhythm for their lives together. All meals are eaten together. Beds are bed. Bathrooms are spotless. Everyone looks out and cares for one another. Recognizing how we belong together is how La Posada has been able to welcome 10,000 guests from countries like Russia, Zimbabwe, and Guatemala through their doors.

Blessed are those who are persecuted for righteousness’ sake, for theirs is the kingdom of heaven.

One of the challenges in attempting to learn about the U.S. immigration system and its enforcement practices is how impossible it is to find clear answers to an unending list of questions: How long are adults allowed to be detained before they are processed? Who conducts credible fear interviews with asylum seekers? How do the cases proceed through immigration and criminal courts simultaneously? What happens to the people who are deported? How are 250 children who were separated from their families still missing? How much of the border wall is actually providing security to U.S. residents?

At the same time, there are equally challenging questions as to how people of faith are to be engaged in this particular issue. What is God’s desire for the people who are seeking safety? What do our Scripture say to us about national security and the plight of immigrants? What does Jesus teach us about our laws in light of God’s love for God’s people? What am I to do when by neighbor is suffering? What is unquestionably clear, though, is that there are people within and outside our borders who are suffering and praying to God for deliverance.

Blessed are you when people revile you and persecute you and utter all kinds of evil against you falsely on my account. Rejoice and be glad, for your reward is great in heaven, for in the same way they persecuted the prophets who were before you.

One of the stories that we will carry with us is the story of a young woman who managed to escape political persecution in her home country. Sadly, she was raped before she could escape and that rape resulted in a pregnancy. While held in detention here in the U.S., La Posada was the only shelter to respond to the letters for help written by this frightened and desperate young woman. When she gave birth, she named her son Emmanuel because of her steadfast faith that God is with her. (And she chose his middle name after the lawyer who offered to represent her case in court pro bono!).

I often forget that many of the people that we label as “illegal,” “undocumented,” or “unlawful” are also people of God and people of great faith. Their stories parallel the plight of Hagar and Ishmael (Genesis 21:8-21), Ruth and Naomi (Ruth 1), and even Mary, Joseph and Jesus (Matthew 2:13-16). Did they cross borders illegally? Were they offered shelter by strangers? Was God with them throughout their entire journey?

Our immigration system is complex and so is the application of our faith. Our delegation continues to wrestle and discern what we ought to feel and do now that we are on the other side of this small journey. We hope you will join us for a time of reflection and sharing at PHPC. Stay tuned for a date!